Interwoven, magical tale of a marigold. 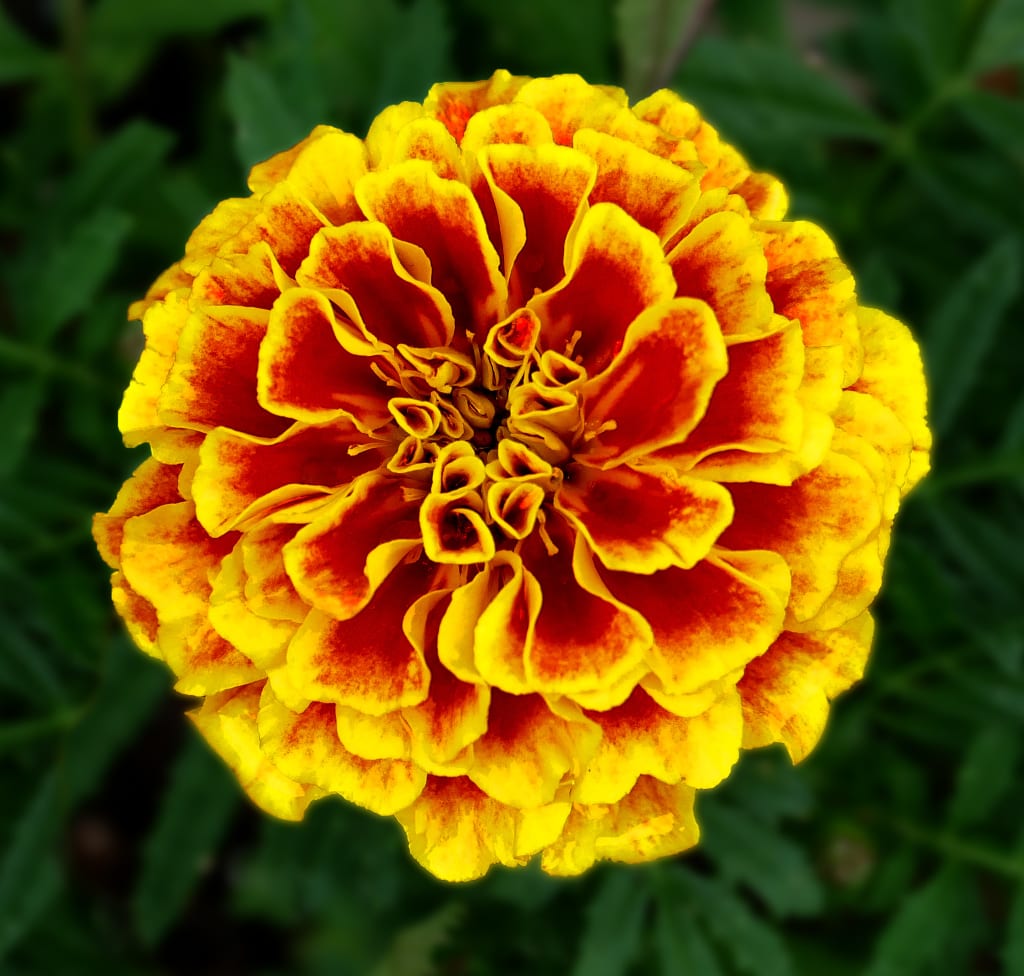 Our story begins in a place and time not known. A princess stands at the castle wall, looking out over the vast landscape. Princess Marigold,  was by far, the fairest in the castle and the most headstrong. Princess Marigold had hair of the purest yellow, as bright as the sun, with traces of red that shimmered. Marigold wasn’t just beautiful, she was the most pleasant out of all. She has an endless imagination, a quick smile, and a kind heart. But she longed to be free and not bound to the castle. The time of marriage, and bound to a man she didn’t know. Marigold was heavy-hearted about her mother’s arrangement.

Marigold knew how life was at the castle, her mother also was a princess. She was prearranged with a man that would help defend the castle walls, and the walls needed defending. Castle Vegan was the most impressive, awe-inspiring, and magnificent castle that stretched the land and its invaders. Sometimes, it was calm and quiet, the people in the castle were happy and thrived. They could go about their daily lives reinforcing the castle and adding to its splendor, but most of the time it was a constant struggle to keep the Vegan castle safe. Next in line for the throne, Marigold had a sworn duty, but she yearned to be free and find love. The horn blew and Marigold was shaken from her deep thoughts. The horn was only blown if a battle was about to begin. Marigold straightened and braced herself, ready as always to protect the castle.

“Marigold, number five. Five! Are you ready?” Marigold number five came out of her dream state. She came back to reality. Five, as she is known, is amongst many Marigolds in the vegetable garden. Five stretched her pedals and dug in her roots, burrowing further in the soil. “Ready!”, five replied.

“Everyone ready?” One telepathically thought. “Release your smell”

All the Marigolds stretched and released their pungent odor as the three rabbits came closer to the garden. The rabbits’ ears twitched, their noses catching the pungent odor in the air.  The rabbits stopped dead in their tracks, turning to hop off in the other direction. “Stand down. Stand down.” One shouted. The marigolds cheered as they relaxed, Another victory! Under the soil, their roots stretched giving, in their way,  high-fives, or low fives you could say. It was very difficult defending the vegetable garden, rabbits and deer were always trying to steal the vegetables. Thankfully, the marigolds were good at defending the garden.

One looked at Five asking, “In another dream, were you?”

Wiggling his petals, “Five, you have an imagination”.

“No!” Five said defiantly, “I have passion!  Passion to be more than a number in this garden. I long to be free and loved. I don’t understand, why you don’t feel the same way. Don’t you want to be more?”

One sighed, “No, I am happy defending the garden. One day, you will move to my spot and be number one. Doesn’t this excite you?”

“Not at all” Five said sarcastically, “I am sick of being a number and whether I am five or one, I do not care.”

One felt sorry for Five and wished that he could do something to make her happy in the garden. Unfortunately, Five always had a stubborn streak and never was happy protecting the garden. Hoping to change the subject, One asked about Five’s dream.

“Well, this time was not much different, I was the princess Marigold, and we were about to protect the castle from the destroyers. It is weird though because my dreams used to have happy endings, me leaving the castle. Now the dreams reinforce how I am stuck there, and here.” One could feel the sorrow that Five felt, and it made him sad. So, he sent her telepathic feelings of love and Five thanked him. Suddenly there was a loud rush of buzzing around the marigolds.

“Pollinators!” One sent out the message to all marigolds. Quickly stretching and shimmering, the bees would be attracted to their petals for pollination. Most of the marigolds were a high bright red, and the bees had a hard time seeing these flowers.  Those marigolds had to release their smell, so the bees could find the marigolds through their antenna. Pollination was exciting for the marigolds and much needed for their life. So, everyone competed for the bee’s attention.

Easily, Five was attached to, her high bright yellow color, and flower head was big and noticeable. If anything, Five was a unique marigold indeed. The bee pollination was very ticklish at times, and this was one of those times for Five, it helped take her mind from her sadness. After pollination, Five drifted off into a much-needed sleep. Five had no enchanting castle dreams or noble knights whisking her away. Five was awoken to voices, the humans! She snapped to awareness; it was always eventful when the humans were around.

“Yes momma, this is the one. Look at how pretty!” the blonde, blue-eyed girl said. Her eyes sparkled as she pointed to Five.

“You are sure?” the lady,  presumably “momma,” in return the little girl nodded emphatically.

Shrugging her shoulders, she crouched down, bringing the spade to the soil, and with a quick jerk, she drove the spade into the soil. The crutching, scraping sound as she shoved the spade into the ground terrified Five. Her mind raced, what was going on? She had seen this before in the garden, and those marigolds never returned when the humans took them. Five tried to think of what to do and how to stop, but she was helpless. One and the others were scared for her, she could feel it within her roots. All were sending love and trying to reassure Five. The digging continued until Five could feel herself being lifted from the soil. Her roots were still hanging on and connecting to the others. She felt them being cut, and there are no words to describe Five’s pain. Severed from One and the family, was agonizing. She was being carried away from everyone, and everything, she could still hear them, sending love, easing some terror and agony. Five returned the love for the last time to her family of marigolds, terrified for the road ahead.

“Are you sure you don’t want to eat this one? It is a very delightful marigold, and it would make lovely garnishments!”

“No. No, momma, she is special and the prettiest I have ever seen. She will be in my room, at my window, just like you promised!”

“Yes, sweetie, just like I promised.” The woman said ruffling her daughter’s hair.

Eat me, that is all Five could hear over and over. Horrified by the thought of her petals being garnished, it was all too much to bear. Five came around, she was all too confused. What a dream, she turned to tell One about the nightmare, but she found that she wasn’t dreaming. Instead, she found herself alone in a little room, planted in a little pot, facing out a window. Once she had plenty of soil surrounding her, a vast landscape, and her family. Now she was settled into a pot, with little soil, and it would appear alone. Five had wanted to leave the garden, but was this her fate?

Suddenly, the blonde hair girl came bouncing into the room singing. “I have a marigold; she is not very old. I take care of her, and she won’t get cold  The little girl sang the made-up tune. Standing in front of Five, the little girl reached out and caressed her petal. Five had never had anyone, besides pollinators, touch her petals, and strangely it felt soothing, making her immediately comfortable.

“I know” cried the girl, “you need a name. How about Mary, Mary the marigold.” Pleased with herself, the girl stared out the window. “I am going to take care of you Mary, no more garden for you. You’re my special flower and I will love you forever.